Below is a review of the statistics about internet usage in Vietnam in 2019.

1. Internet usage situation in Vietnam in 2019 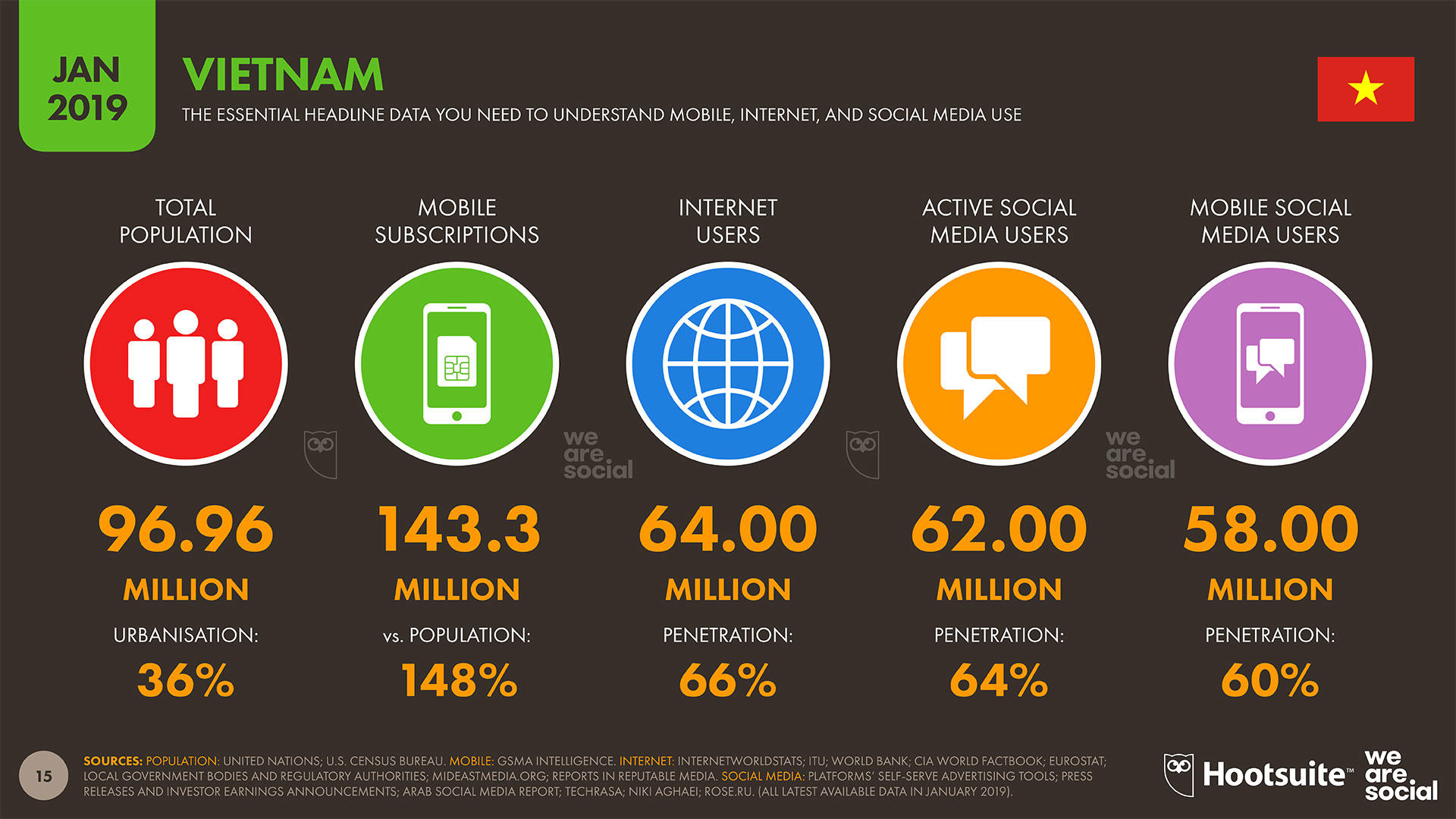 Internet usage situation in Vietnam in 2019

In 2019, Vietnam's population will reach approximately 97 million, with the urban population rate of 36%. In the same year, there were 64 million Internet users, an increase of 28% compared to 2017.

According to statistics, there are 58 million social networking users on mobile devices as of early 2019, this number increased to 8 million users compared to the same period last year. Along with the development of technology, the mid-range and low-end phones are constantly being born, making it easy for many people to own smartphones and access the Internet. Although the population only reached 96.96 million, the number of registered telephone subscribers amounted to 143.3 million. This shows that the majority of Vietnamese people have access to smart mobile phones and many people use 2-3 phones at the same time to serve life and work.

While the smartphone era is on the rise, traditional TV equipment is still extremely effective with access to 97% of adults. In addition, thanks to the direct connection to the internet, the content that TV brings also becomes more interesting, diverse and still an indispensable "god food" of families.

Besides, we can not deny the power of CDN technology in supporting the rapid transmission of digital content to every user on any device. International-level football matches with a huge number of viewers, sharp, smooth transmission images, no lag ... all are the results of CDN (Content Delivery Network) technology. This is the most effective website acceleration technology today.

2. Frequency of Internet users in Vietnam in 2019 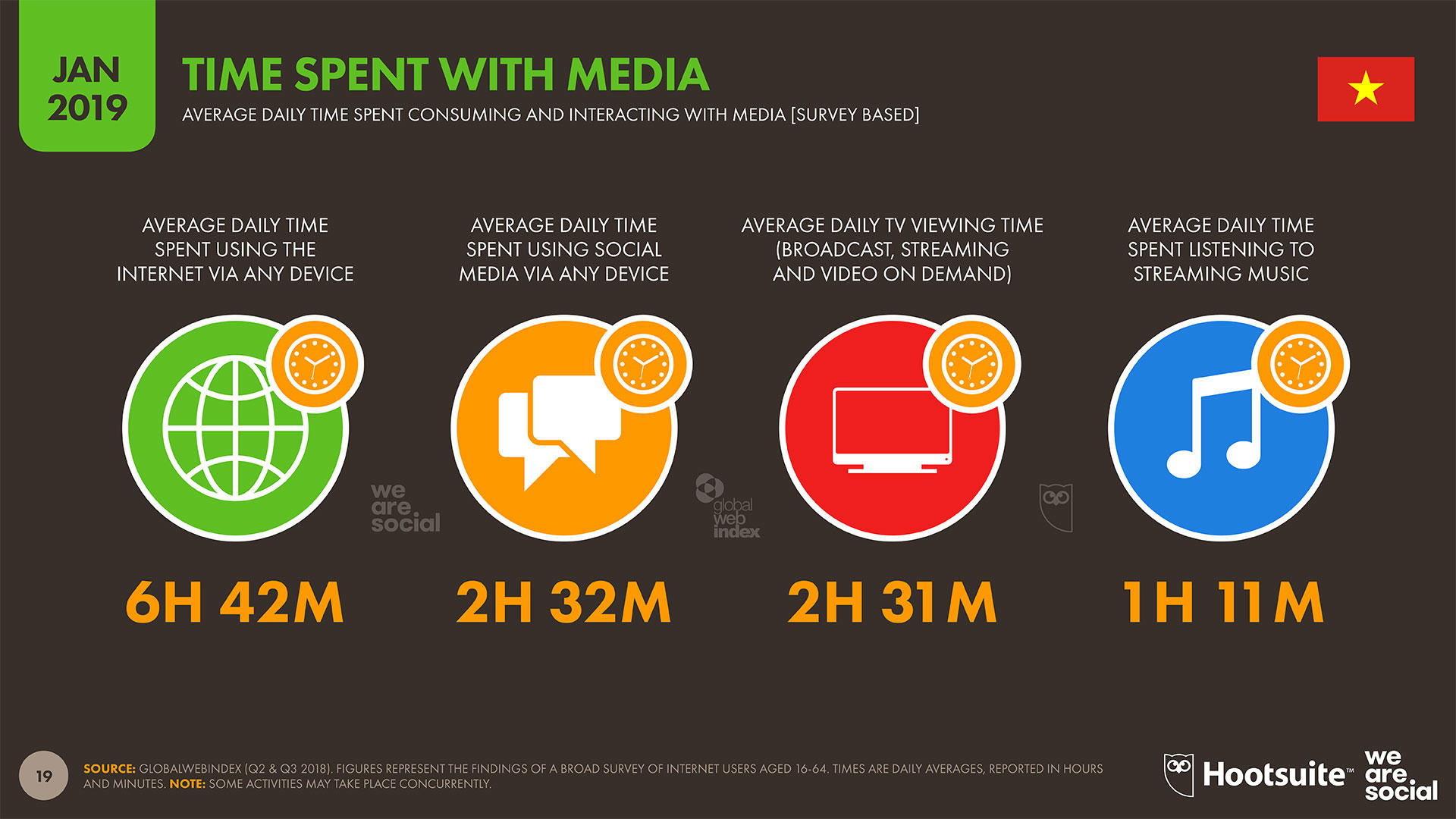 Frequency of Internet users in Vietnam in 2019

In terms of infrastructure, the speed of Internet access still grows every year. Specifically, the average speed of internet access on phones was 21.56 MBPS (up 6.1% compared to last year) and computers were 27.18 MBPS (up 9.7%).

3. The rate of users interacting with social networks in Vietnam in 2019 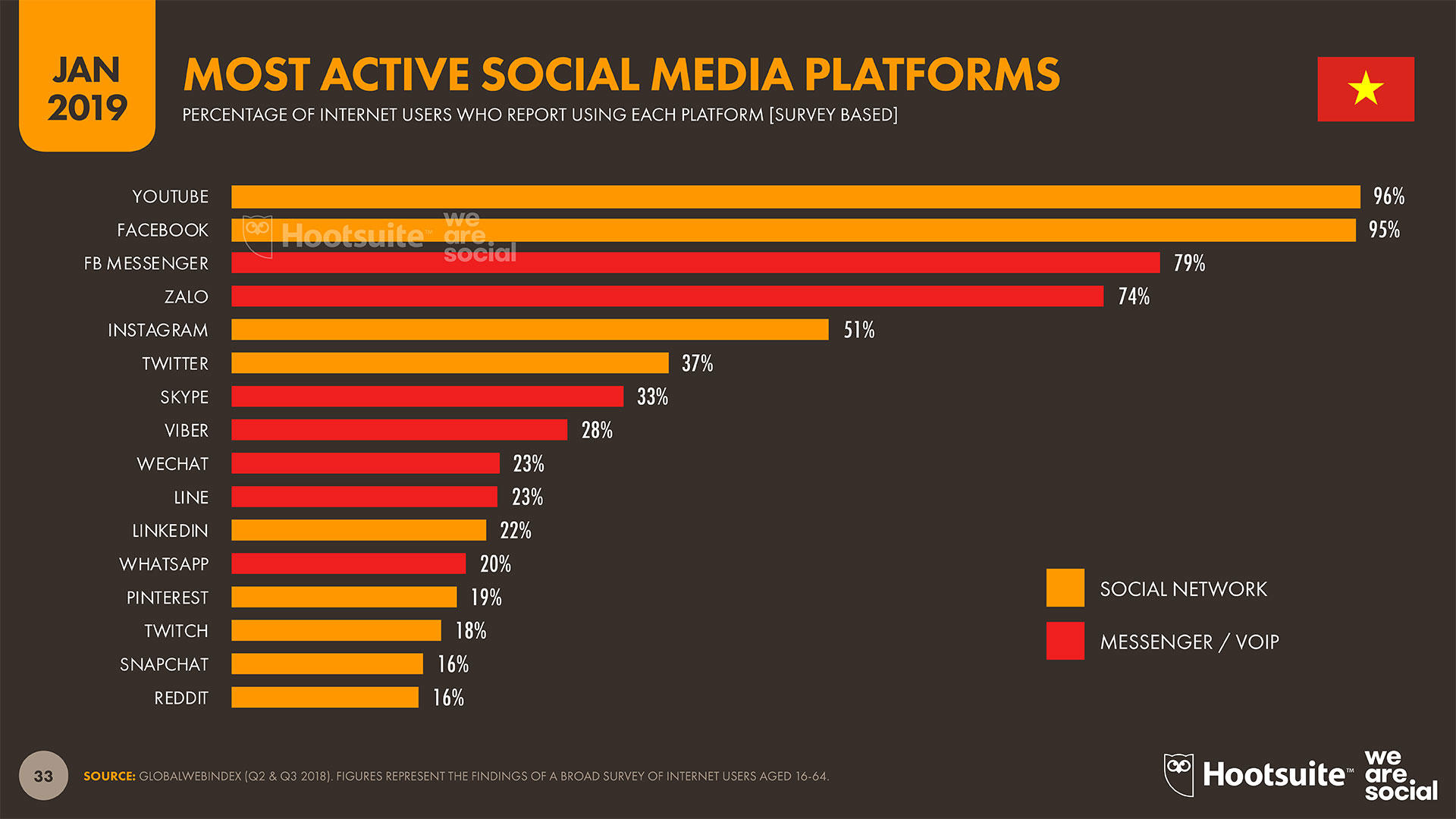 In 2019, the social network is still growing with 62 million users (accounting for 64% of Vietnam's population, up to 7% compared to 2018). The number of accounts using social networks on mobile also increased by 16% compared to last year. Influentially, social media is a popular communication tool for almost all businesses in Vietnam.

A big difference this year with the statistics of 2018, Youtube surpassed Facebook to become the most active social network in Vietnam. According to statistics from Google, Vietnam ranked in the top 5 countries watch YouTube videos the most in the world, surpassing those with advanced technology such as Japan, Korea, Taiwan ...

According to a survey from the supply market, 65% of Vietnamese companies increased their budgets in the field of Video Marketing last year, the cost of video advertising increased to 16% of the average of the brand's average advertising costs. .

4. The proportion of smartphone users accessing the internet in Vietnam in 2019 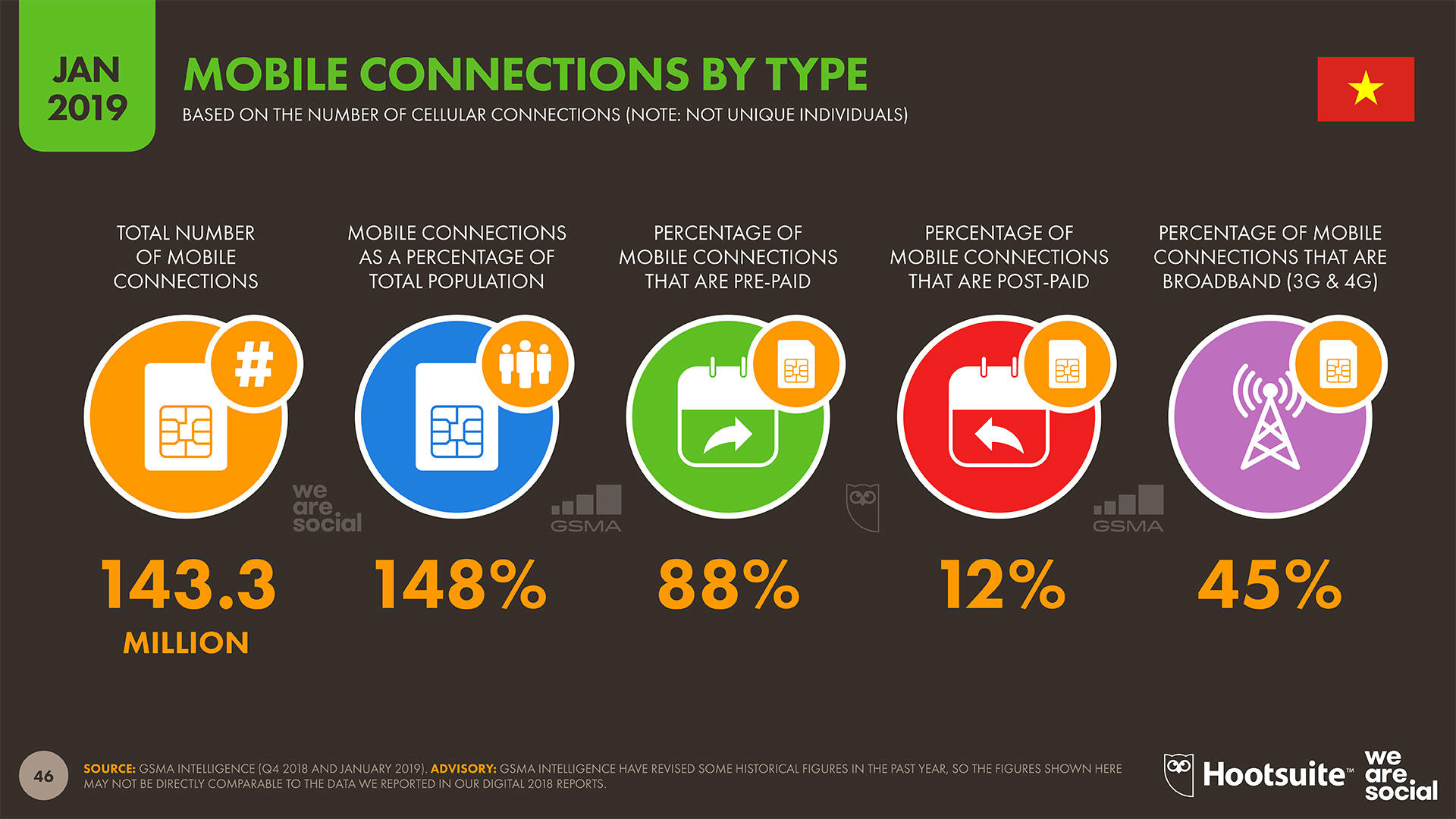 Among 64 million internet users in Vietnam 2019, the number of users accessing via mobile devices is 61.73 million (accounting for 96% of internet users). Of the 143.3 million registered subscribers, 45% have subscribed to 3G & 4G. According to 2019 statistics, there are more than 2.7 billion downloads of applications on the phone and the amount spent by consumers on these applications is $ 161.6 million, on average each day touches the phone more than 150 times. , and only from 2018 to 2019, the number of social networking users on mobile devices increased by 16%.

The frequency of users using the Internet is growing, leading to the strong growth of internet-based business services. Services to speed up website transfer are always concerned. And CDN is the technology of choice for digital content transmission and security solutions. In addition, cloud storage services such as Cloud Storage or Web application security firewall solutions are always paid more attention.

Recent Check Point Research studies show that around April 2020 there was a dramatic increase in COVID-19 scams with 18 million phishing emails per day, 240 million spam messages and more than 2,000 names. new suspicious domain.

This morning, March 2, 2021, from 8.30 am to 8.45am, there were 2 DDoS attacks on VNIS infrastructure of VNETWORK. The report information about these attacks is detailed in the figures